The management team of the Evangelical School of Theology Educational Center (EST EC) represents the school’s leadership in Poland – Rector, Chancellor, and Academic Dean. Their mission is to develop the strategy and goals of the school, provide guidance and monitor academic performance and financial management for the events organized by EST EC. They meet regularly to discuss current and important issues of school life, programs and activities. They also cooperate with the coordinators of specific projects, who provide updates and accountability regarding various projects and present new ideas for consideration.

Dr. Wojciech Szczerba – Rector: Dr. Szczerba is responsible for social and cultural programs and also teaches at EST. He is a graduate of Biblical Theological Seminary (1994) (now EST) and Christian Theological Academy in Warsaw (1996). In 2000 he completed his Ph.D. in philosophy at the University of Wroclaw. Dr. Szczerba became the Academic Dean in 2002 and served in this position until he became the Rector in 2006. In 2009, he received a second doctorate (habilitation) in the field of humanities and ancient philosophy from the University of Wroclaw. His wife is Magdalena and they have two children.

Marek Kucharski – Chancellor: Mr. Kucharski is a graduate from the Biblical Theological Seminary in Wroclaw, Poland (1994). From 1994 to 2002, he served as a pastor at the Evangelical Church “ICHTUS” in Wrzesnia, Poland. In 2002, he attended the one year Residency Program (internship) for pastors and leaders of Christian organizations at Fellowship Associates in Little Rock, Arkansas USA. In 2003, Mr. Kucharski joined the staff of EST as the Director of Discipleship, and in 2006 was appointed to the position of Chancellor. In 2012, he received a Licentiate (Bachelors) degree in Finance and Business Management from the Wroclaw School of Banking. In 2014, he completed his MBA studies from Franklin University in Columbus, Ohio USA. Since 2015, he has also served as  the coordinator for the Institute of Church Development. His wife is Agnieszka and they have two sons.

Dr. Piotr Lorek – Academic Dean: Dr. Lorek coordinates academic programs and projects and teaches at EST. He is a graduate of Biblical Theological Seminary (1999) (now EST) and University of Glamorgan in Wales (2000). In August 2003, he joined the faculty of EST and in February 2004, defended his Ph.D. thesis in the field of biblical theology at the University of Wales. Dr. Lorek was the Director of Biblical Studies at EST from 2005 to 2006 and in 2007 became the Academic Dean. In 2015, he obtained a second doctorate (habilitation), the degree of PhD in the field of biblical theology, from the Christian Theological Academy in Warsaw.His wife is Alina and they have two children. 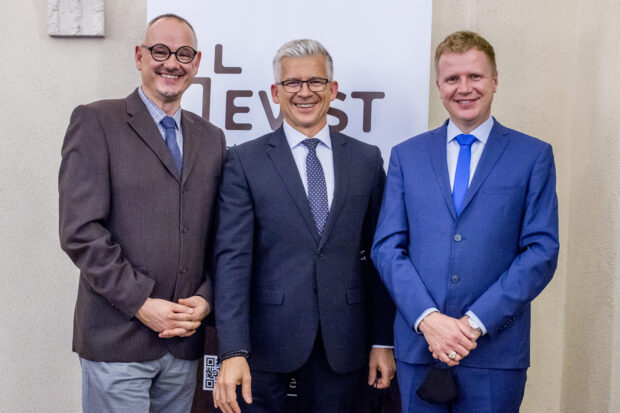