EST organized the first-ever Festival of Protestant Culture in Wroclaw, Poland.  Wroclaw has a rich Protestant heritage, which has generally been unknown. The festival broadened the city’s knowledge of its past and stimulated ecumenical dialogue and understanding.  Numerous churches and para-church organizations cooperated with EST to bring together a wide variety of events in this week-long Festival, which was partly sponsored by the city government.

The first event was an ecumenical service at the Lutheran Church.  “I don’t remember ever seeing so many Protestant pastors gathered under one roof, and the Catholic archbishop also had a role in the service.  I pray that this will be the beginning of much more contact between believers of various churches,” commented Dr. Wojciech Szczerba, Rector of EST. Another event was a concert organized at First Baptist Church where gospel music was played by a local band. Approximately 300 people came to the concert and not only listened but fully participated with clapping, dancing and singing together ‘Amazing Grace’ and other songs. The concert lasted until almost 11 pm. It was a miracle and a great experience!

The Festival featured concerts, workshops, a walking tour of Protestant sites, a showing of the movie ‘Luther’, lectures, discussions, and a fun fair for children.  In addition, we celebrated the official opening of the Jonathan Edwards Center at EST, partnering with Yale University.

The last event of the Festival was a concert given by a youth choir from the Pentecostal church in Wroclaw. They sang a Bach cantata and several gospel songs. It was a great, great performance with a wonderful atmosphere.  Dr. Piotr Lorek (Academic Dean at EST) and Dr. Wojciech Szczerba (Rector at EST) gave a short introduction explaining the main ideas of Protestantism and Evangelicalism. They encouraged the participants to get to know more about Protestantism. 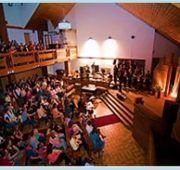 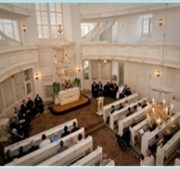 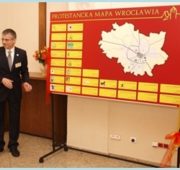