The III Festival of Protestant Culture was organized by the diocese of the Wroclaw Lutheran Church, Evangelical Union, Lutheran Education Center, Antioch Pentecostal Church, Evangelical School of Theology, and First Baptist Church in Wroclaw. The project was co-funded by the City of Wroclaw. Admission to all festival events was free. Honorary patronage was taken by: the European Parliament, Rafal Dutkiewicz, Mayor of Wroclaw, and Bishop Jerzy Samiec, head of the Lutheran Church in Poland.

EST showed the film ‘Luther (directed by Eric Till, Germany, 2003). The film tells about the life of a young monk, Martin Luther, who became a reformer and founder of the Protestant church. Fr. Bishop Ryszard Bogusz welcomed those who attended the showing of the film and afterwards Dr. Piotr Lorek, Academic Dean at EST, led a discussion about the film. Another film, ‘Houses of the Lord’ (directed by Ute Badura, Germany, 2010), was shown during the Festival. The film tells about Protestant churches in the Lower Silesia region and also attending the showing was the director, Ute Badura. After the film’s enthusiastic reception there was time for questions to the director. Since there was no end to them, conversations, including those on Polish, German and Catholic, Protestant relations continued in a more informal setting with coffee and tea.

The ceremonies, films, gospel choir from Philadelphia (USA), lectures, events for children and other activities were attended by representatives of local authorities, ecclesiastical and secular institutions and participants representing many different denominational churches and fellowships.

The Festival ended with the Jonathan Edwards International Conference, May 31 to June 1, 2011. There were leading Edwards’ scholars from eight countries, four continents and six international Edwards’ centers that gathered at EST to attend the conference entitled, “Christianity in today’s world: the legacy of Jonathan Edwards”. 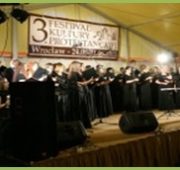 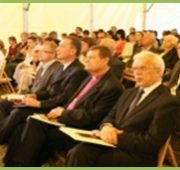